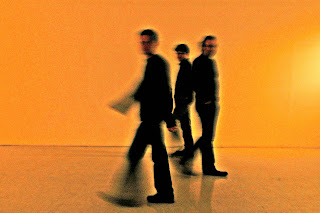 Living Traditions Presentations is proud to bring you another Irish music experience, by the name of Buille. ‘Buílle’ means blow, stroke or beat, or in this presenter’s opinion, you’ll be blown away by the artistry and amazing music performed by these three well-known musicians. This concert is sponsored by NAU Community Music and Dance Academy and Northern Arizona Celtic Heritage Society. Buille will be performing Thursday, May 15, 2008 at 7:30pm in Ashurst Auditorium on NAU’s north campus. Doors will open at 7:00pm. Tickets are available from NAU Central Ticketing (928-523-5661) Cedar Music, or Jitters Coffee. Tickets are $25, $23 for NACHS, FFOTM, NAU/CCC Faculty/Staff, and Seniors, and $15 for children (17 and under) and NAU/CCC students.
About the Band
Buille first came into being during the summer of 2004. It combines the unique talents of Niall Vallely on concertina, Paul Meehan on guitar and Caoimhín Vallely on piano. They have just completed their debut album which will be released on the Vertical label in June. The album consists mostly of new music composed by Niall Vallely over the past couple of years. While based in traditional Irish forms, the music draws on a wide range of influences from the worlds of jazz and classical music in particular.
Armagh-born Niall Vallely has established himself in recent years as one of the most original and distinctive voices in Irish music. A former member of Cork-based band NOMOS, he has been acclaimed throughout the world as one of Ireland's greatest concertina players. He has played with Michaél Ó Súilleabháin, Karen Casey, Tim O’Brien, Paddy Keenan, and many others.
Paul grew up and started learning Irish music in Manchester in the midst of a flourishing scene . In his early teens Paul moved back to Middletown, County Armagh with his family. He quickly established himself as a rising star on the banjo, while more recently spending a lot of time on the guitar. He has toured with Karen Casey band and is a member of Lunasa. He’s also performed with Altan, Paddy Keenan, Tommy Peoples, Liz Carroll, and many others.
Like his older brother, Niall, Caoimhín grew up in Armagh and began tin whistle lessons at the Armagh Pipers Club before moving on to learn the fiddle. He also started classical piano lessons at this time.
What the experts think…
Together “Buille is as fresh a breath that's blown through traditional (and roots) circles in a long, long time.” – The Irish Times “Buílle is mostly Niall's own tunes, often in the Irish or Scottish idiom, and invariably played with the type of flair and musicality which most of us can only wonder at…Miss it if you dare.” – Irish Music Magazine
“…of all the albums issued in pursuit of the holy grail of trad-jazz-classical fusion, "Buille" ranks near the top in vision and execution. If Niall Vallely, Caoimhín Vallely, and Paul Meehan have not quite hit upon something startlingly new in sound, they have most assuredly raised that sound to a new level of skill, sophistication, and soul worthy of any Irish music devotee's interest.” - Irish Echo
Posted by Living Traditions Presentations at 11:27 AM 2 comments: