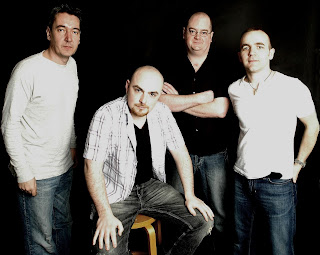 RE: Old Blind Dogs in concert
When: Sunday, September 7, 2008 at 7:00pm. Doors open at 6pm.
Where: The Orpheum Theater, 15 W. Aspen St. Flagstaff
Contact: Kari Barton, 928-600-1365 or Kari@LivingTraditionsPresentations.com
Description: Old Blind Dogs are a Scottish band that have entertained Flagstaff audiences for 16 years. Simply the best Scottish folk band out there today.

Living Traditions Presentations is excited to bring to you once again, the Old Blind Dogs. This band was our first official presentation ever in October 2004, but under various organizations, Ron and Kari Barton have been bringing Celtic music to Flagstaff for 20 years.
Old Blind Dogs has been one of my favorite bands since they first played in Flagstaff around 1993. They have been through personnel changes over the years and now are back to a four piece band, with a new piper, Ali Hutton. This band is entertaining for audiences of all ages and never disappoint! Come see the Old Blind Dogs September 7, 2008 at 7:00pm (please note the earlier start time) at The Orpheum in downtown Flagstaff. Tickets are available at Animas Trading Company, Rainbow’s End, www.orpheumpresents.com, and Cedar Music. Email Kari@LivingTraditionsPresentations.com for more information or call 928-600-1365. This concert is brought to you by Living Traditions Presentations.

About the new album:
New CD, new line-up, very recognisable sound...Old Blind Dogs are now Fraser Stone (percussion), Aaron Jones (bouzouki/guitar), Ali Hutton (pipes) and the only remaining founder member Jonny Hardie (fiddle). They continue their habit of many years of treating the tradition with respect...but not too much respect… New-boy vocalist Aaron Jones brings his own sound to the OBDs as well. It's more reminiscent of the intense, occasionally almost snarly Ian F. Benzie sound of yore than of the creamy, melliflous tones of Jim Malcolm, and the OBDs seem to have adjusted their choice of songs to take account of that. – The Living Tradition Magazine.

Awards:
We have recently learned of another award for the album 'Four on the Floor'. The CD picked up the award for best album in the Celtic category of the recent IAP Awards. The Indie Acoustic Project is dedicated to giving recognition to outstanding works of innovative acoustic (or mainly acoustic) music.

SCOTTISH ALBUM OF THE YEAR The ROSAS awards
Four on the Floor – Old Blind Dogs
Simply the best Scottish folk band out there today. They have survived personnel changes and thrived. Aaron, Johnny, Rory, and Frazer have brought all of their amazing talents to this album, holding nothing back. Original arrangements of traditional tunes and songs that will steal your heart away. Live on stage they never disappoint, always true to their traditional heart, Old Blind Dogs are not afraid of change and this album 'Four on the Floor' is a brilliant collection of what Old Blind Dogs are all about. Great stuff, their best album yet.
Posted by Living Traditions Presentations at 8:31 AM 2 comments: