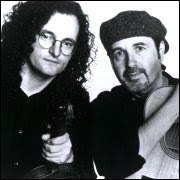 Friday, September 26, 2008, Flagstaff audiences will once again be amazed by the Irish music duo, Martin Hayes and Dennis Cahill. They have come through Flagstaff twice before and the people loved them!
Martin Hayes has been an All-Ireland Fiddle Champion six times over, has taken home a National Entertainment Award (like an Irish Grammy) and was named Folk Instrumentalist of the Year in 1999 by the BBC Radio Awards. His fiddling is representative of his native East Clare style, slow and lyrical. But don't let that fool you, he is sure to have you out of your seat at least once during the show!
Dennis Cahill is a native of Chicago, born to parents from County Kerry. He is as well-versed in classical, blues, and jazz, as he is in traditional music. His innovative accompaniment has been acknowledged as a major breakthrough for guitar in Irish traditional music.
The musical rapport between Hayes and Cahill is so strong that it is often said they appear to be playing one instrument, “working on a seemingly telepathic level,” as CMJ describes it. While Martin pursues a melody, Dennis explores the harmony and rhythms within the tunes. He seems to know intuitively Hayes’ next move, consistently matching it with astonishing skill and grace. Their live performances weave tunes that stretch up to thirty minutes long, in what Hayes describes as “a three-way conversation between the two of us and the music.”Irish fiddle virtuoso Martin Hayes and American guitarist Dennis Cahill possess a rare musical kinship. Together they have garnered international renown for taking traditional music to the very edge of the genre, and holding listeners spellbound with their slow-building, fiery performances. The duo opens the doors of traditional Irish music and releases its pure, distilled beauty, while incorporating sensibilities from the worlds of blues and jazz. The New York Times calls them “a Celtic complement to Steve Reich’s quartets or Miles Davis’ Sketches of Spain.”
Don't miss this concert of traditional Irish music with subtle infunsions of classical, jazz, and blues!

Martin Hayes & Dennis Cahill will perform Friday, September 26, 2008 at 8:00pm at the Cline Library Auditorium on NAU's Campus. Tickets are $25 with a $2 discount to members of NACHS, FFOTM, Seniors, NAU/CCC Faculty and staff. Student and Child tickets are only $15! Tickets are available at NAU Central Ticketing, Cedar Music, and www.ticketmaster.com. For more information, email Kari@LivingTraditionsPresentations.com or call 928-600-1365.
Posted by Living Traditions Presentations at 10:34 AM 2 comments: